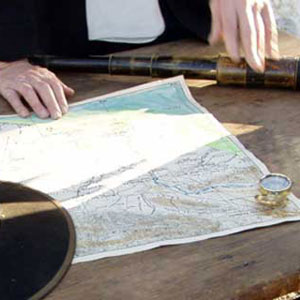 THE CAPITULATION AT CAHUENGA
(reproduced as it was written and published by Lt. Col. John Charles Fremont, Commander of the California Batallion, 1847)

TO ALL TO WHOM THESE PRESENTS SHALL COME, GREETING;
Know ye that, in consequence of propositions of peace, or cessation of hostilities, being submitted to me, as commandant of the California Battalion of United States forces, which have so far been acceded to by me as to cause me to appoint a board of commissioners to confer with a similar board appointed by the Californians, and it requiring a little time to close the negotiation; it is agreed upon and ordered by me that cessation of hostilities shall take place until tomorrow afternoon (January 13th), and that the said Californians be permitted to bring in their wounded to the mission of San Fernando, where, also, if they choose, they can remove their camp, to facilitate said negotiations.

Given under my hand and seal this twelfth day of January, 1847.

Article 1. The Commissioners on the part of the Californians agree that their entire force shall, on presentation of themselves to Lieutenant-Colonel Fremont, deliver up their artillery and public arms, and they shall return peaceably to their homes, conforming to the laws and regulations of the United States, and not again take up arms during the war between the United States and Mexico, but will assist and aid in placing the country in a state of peace and tranquillity.

Art. 2. The Commissioners on the part of Lieutenant-Colonel Fremont agree and bind themselves on the fulfillment of the first article by the Californians, that they shall be guaranteed protection of life and property whether on parole or otherwise.

Art. 3. That, until a treaty of peace be made and signed between the United States of North America and the Republic of Mexico, no Californian or other Mexican citizen shall be bound to take an oath of allegiance.

Art. 4. That any Californian or other citizen of Mexico desiring, is permitted by this capitulation to leave the country without let or hindrance.

Art. 5. That, in virtue of the aforesaid articles, equal rights and privilege are vouchsafed to every citizen of California, as are enjoyed by the citizens of the United States of North America.

Art. 6. All officers, citizens, foreigners, or others, shall receive the protection guaranteed by the second article.

Art. 7. This capitulation is intended to be no bargain effecting such arrangements as may in future be in justice required by both parties.

Additional Articles
That the paroles of all officers, citizens, and others of the Untied States, and of naturalized citizens of Mexico, are by this foregoing capitulation canceled, and every condition of said paroles from and after this date are of no further force and effect, and all prisoners of both parties are hereby released.

(Signatures the same as above)
Ciudad de Los Angeles
January 16, 1847