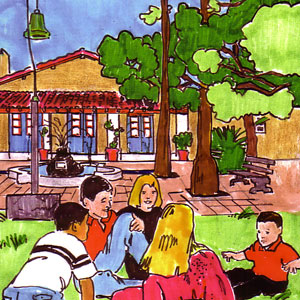 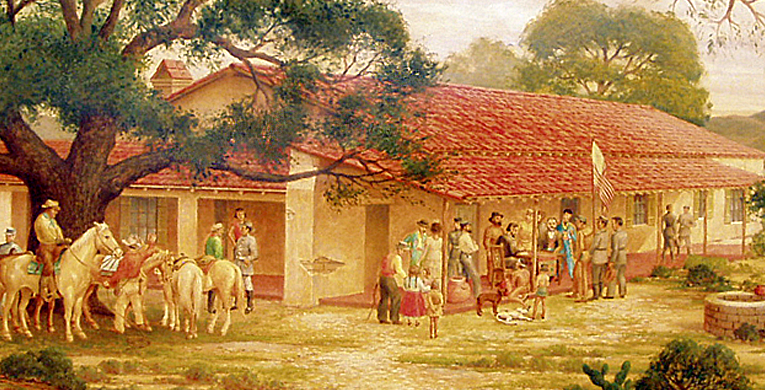 Welcome to one of the most important places in America’s west. Welcome to Campo de Cahuenga, as young people in 1847 would have known it.

Butterfield stage coaches once stopped right here at Campo de Cahuenga. Imagine the stagecoach drivers watering their horses nearby at the ford of the Los Angeles River.

The Los Angeles River flows across the Cahuenga Pass, close to this historic place. Did you know the original Spanish name of the river was El Rio de Nuestra Señora La Reina de Los Angeles de Porciúncula, named by explorer Gaspar de Portola in 1769? Try to say it.

Imagine ranchero children who lived here before 1847 tossing their silver “reales” or “tlacos” into a wishing well. These were their coins. Long before that, native Tongva used seashells as money. Children today can make a wish at the Campo de Cahuenga fountain.

Next time you sing “God Bless America” in school, think about the Campo de Cahuenga. This is the exact spot, which helped America become a nation “from sea to shining sea.” Our nation’s westward expansion to the Pacific Ocean was called “Manifest Destiny”. It came true here.

The uniformed men at this table are signing a paper that is one of the most important agreements in our nation’s history. Lt. Col. John C. Fremont of the United States and General Andres Pico of the Mexican forces are ending a war in California. This brings together two cultures. Everyone becomes a “Californian”. Because of this paper, no one got hurt. It is known as the Treaty of Cahuenga. It represents peace with honor.

The gardens of Campo de Cahuenga have many “native” plants and trees. Many of these grow wild or are in places near your home. How many of these plants from the native Tongva trails do you recognize?

The Tongva are an ancient people who have lived in Southern California long before the Spanish and other Europeans arrived. At one time Tongva girls and boys played very near where the Campo de Cahuenga historic site is today. The language of the Tongva is very close to a group of languages called Uto-Aztecan. One of their words is “nga”. It means “village” or the place where people live. That’s where Campo de Cahuenga gets the “nga” in its name. 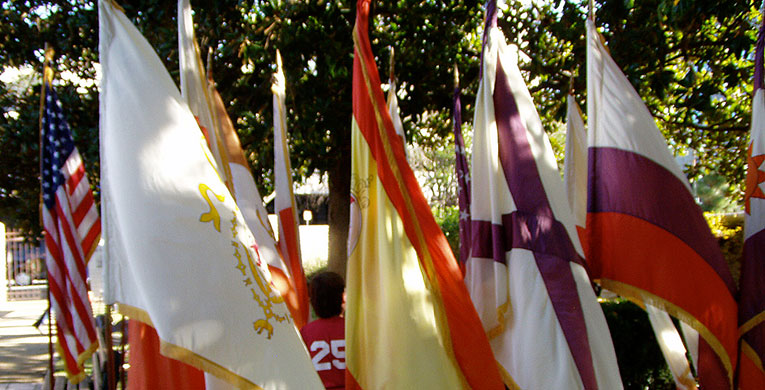 Twelve flags have flown over California since its discovery. Each one represents important times in our growth. How many can you name?